The Story Of My Drum 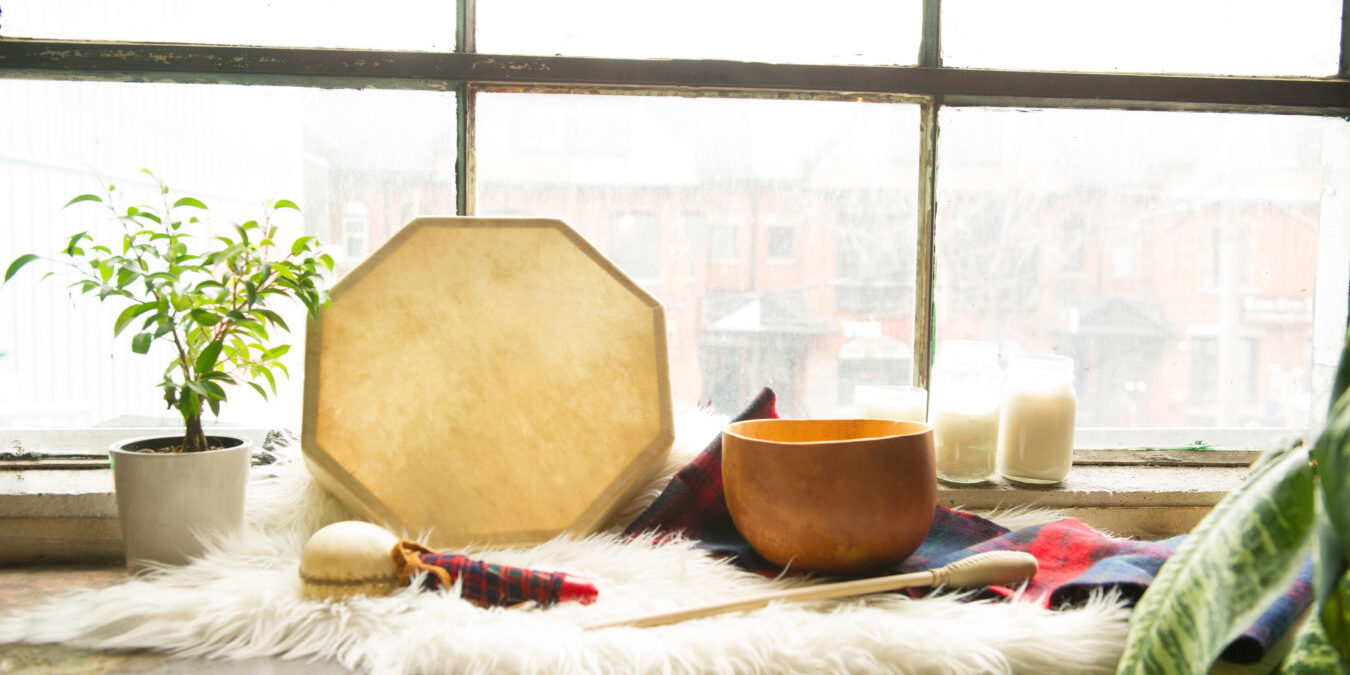 Drums are important to my little family.

They have been signs of being in the right place at the right time, empowered significant growth, revealed past-life gifts, and have brought families together in surprising and heartwarming ways.

My drum is a sacred symbol of my family, my friendships and my community.

So it’s no wonder that, in January, when the Spirits told me I had to give it away, I freaked out. Seriously – there was nothing zen about it. I resisted like a cat resists a swim in the lake!

But, as one who does her best to do right by the Spirits, we all know how this ends…

With a heavy sigh, I began making arrangements. But as I thought about it, I realized that it wasn’t the drum that I was so attached to, per se, rather the story of this particular drum.

Shamanism is all about stories, and this is story of my drum. (I’ve changed a few names to protect the innocent ????)

When I was brought into the Indigenous community in Toronto, the emphasis was on teaching my son, Roman. The elders would teach him, and they would teach me so I could reinforce the teachings within our family.

I agreed to this arrangement even though I knew nothing. I had no idea what I was getting into, and I felt tremendous pressure about my role in teaching my son anything about Indigenous spirituality. It feels foolish to think of it now, as though I could teach him anything, but like I said, I knew nothing.

The elders said, “attend teaching circle,” so I did. It helped me get my bearings and begin to glimpse the smallest part of what it was to raise a child in an Indigenous Canadian environment.

One night after teaching circle, a young man approached me and introduced himself.

“I’m Sam, and I was touched by your story,” he said. “I was adopted into a white family during the 60s and 70s scoop, and both my sister and brother married non-natives, so now I’m teaching my nieces and nephews their culture, and I’d be happy to help with your son, too.”

Sam was a god-send to my son and I. Roman looked up to him, I appreciated him, and my family liked him very much.

True to his word, while Roman and I were learning all about ceremony and spirituality, Sam taught Roman about other elements of the culture. He took Roman to drumming circles, made him a beater for him to learn the honour drum, and took us to our first pow wow where we met Sam’s family.

Sam’s brother Sean taught Roman how to dance in the pow wow arena. His father and sister in law kept me company and made me feel a welcome part of their family. In fact, when it came time for me to start my marketing business a decade ago, I hired Sean, a talented graphic designer, to help out. He designed my logo, then gifted me a whole website.

Sam gave me my first eagle feather to honour me as a single mother, and he gave Roman his drum. A lovely octagon Pueblo-style deer skin drum that had been originally gifted to him by a southern dancer.

It was a southern style drum for my southern boy (my son’s father is in New Mexico.) A few years later, Roman made his own drum, and gifted that southern drum to me.

Sam was forthcoming about his adoption experience, and both he and his brother Sean spoke often of their ‘white brother’ Steve. They, and Sam and Sean’s natural sister, had been adopted by a police officer in Ontario and raised together. Steve was the one member of the family I never met.

Ten years before being adopted in, I attended the University of Toronto.

On the first day of my first year, I met Amanda, and we forged a life-long friendship. Through babies, divorces, marriages, jobs and degrees, we stayed close. Amanda became a constant in my life, and one of the constants of our conversations was the topic of her long-lost brother.

When Amanda’s mother, Leslie, was 15, she had given birth to a boy.

Back in those days, if one had a baby as a minor, it was up to the mother’s parents to decide what to do. The young mother had no rights.

Leslie’s mother forced her to give the child up for adoption, and Leslie’s struggle to find the boy began the next day.

A year or two later, she moved out of her family home and married that baby boy’s father. She and her husband went on to have two more children together, including Amanda.

Not a birthday went by that this long-lost brother was not remembered by his family. Not a Christmas went by when there was not a table set for Amanda’s brother.

Time marched forward. Roman grew, I got to know Sam, Sean and their family better, and Amanda’s and my friendship remained strong.

Amanda heard all about Sam and Sean on a regular basis, she saw the pictures on Facebook and often commented. But really, I lived in two different worlds: My indigenous community and my nonnative community. The two rarely came together.

The same day the law came into effect, Leslie filled out the paper work to finally, after 37 years, find her boy, Amanda’s full-blood sibling.

A few months later, Amanda called me with excitement in her voice.

I asked for details; this was so exciting! By now I had known Amanda for 12 years and had been hearing about this brother for all that time.

“Well,” she began, “He was adopted by this [Ontario city] cop, and he has three Native siblings – they were adopted too. His name is Steve McLeod.”

I paused. A heartbeat. Two heartbeats.

“I don’t know him personally, but I know the brothers and parents, I know the family. You know Sam and Sean I always mention? That’s them. They’re your brother’s family.”

Now it was Amanda’s turn to fall silent. All this time, I had been close to her brother’s adopted family and mentioning them to her for years. She already knew their faces.

She knew all about how Sean had taught Roman to dance in the arena while Sam had taken Roman around to the honour drums and taught him to shake the drummer’s hands in acknowledgement. How these men had taught Roman to offer tobacco before taking pictures of one’s regalia, and to be an active and respectful member of his community.

She knew that the sacred and well-loved drum that I brought with me on fasts and into sweat lodges originally came from Sam.

That same night, Leslie spoke to Sam’s brother Sean, and together they planned how to break the news to Steve that he had a birth family – a mother, a father and two 100% siblings that loved him, wanted him, and had never given up searching for him.

The McLeod family meshed with Amanda’s family, and somehow, against all the odds, it was the McLaughlin family that was the pivot. No, that’s not right. It was really Sam who was the pivot by stepping up all those years ago to help a young man find his way – Sam is the star of this story.

So you see, that drum is more than just a deer skin drum.

There is a rawhide tie in that drum for the four families of this story that ties in the middle, binding the drum to create a sacred instrument: Mine and Roman’s, Amanda and Steve’s, Sam and Sean’s, and, of course, that lovely retired police officer’s, the man who made a home for four children adrift in the system.

That drum represents those who stepped forward to teach my son and I and accept us into their lives out of sheer kindness.

That drum represents my friendship with one of the best women in the world, her family, her children and their happiness.

That drum represents my son’s father’s family down in New Mexico. Lovely people who gave me a lovely son and my son’s grandmother who helped us on this spiritual journey.

That drum represents teaching the young ones how to dance and honour tradition.

That drum represents the generosity of bringing a stranger into one’s circle and making them family through adoption or friendship.

And finally, that drum represents my own family on my father’s side, for the Spirit that works through that drum is an Miꞌkmaq ancestor from Cape Breton Island.

The wheel is always turning.

And, of course, it will have another story long after this.

Next week, I am meeting with Steve (the long lost brother) to give him the drum. You see, Sam’s wedding is next weekend, and both Steve and Sean will be there, so Steve is going to deliver the drum to Sean’s middle child on my behalf.

Tomorrow I will feed this drum for the final time and thank it for all the healing work it’s done for me, my community, my clients and students.

Sean (Sam’s brother who designed the logo) and his family live up in the Yukon now, and Roman thinks it’s interesting how this drum has travelled from the south to the north of Indian country in this way.

This young one looks like Roman did at the same age, and it feels right that the drum remains in the Indigenous community, where people understand its spiritual and cultural significance, and with people who are part of its story.

And next week, this drum will have a new young man to care for it, and this story will become his to tell.